What is the OWA Mandate?

What is the principal activity of the OWA?

The OWA meets monthly from September until June. It is a gathering of amateur and professional woodworkers from the Ottawa Valley and surrounding area. Normally each meeting has a theme - one main topic which is presented and discussed in an open-forum atmosphere. It's a great opportunity to meet fellow woodworkers, share ideas, seek advice, and get out of the sawdust once in a while! Over the last couple of years we have been expanding into events that include members and non members. 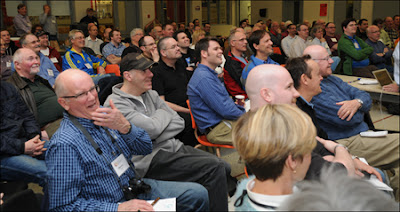 What kind of woodworking does the OWA include?

The OWA focus is on woodworking in general. We discuss everything from seasonal wood movement and finishing techniques to table-saw tuning and shop safety. The membership consists of a mixture of hand-tool and power-tool enthusiasts, and those inbetween.  Our members are professionals and amateurs, and beginners, intermediate, and accomplished woodworkers.

Can anyone join the OWA?

New members are always welcome! The membership fee is $50.00 per year ($25.00 for full-time students with a valid student card). Visitors can attend two meetings before making a decision to join or not.  Information about the next meeting is posted in the side-bar that appears by clicking the three short lines at the top left of the home page.

What is the OWA structure?

The OWA is governed by a Constitution and a set of Bylaws. Each year elections are held and an executive is voted into govern the organization. The executive officers for the 2019-20 season are:

Can you say a little about the early history of the OWA?

Sure. Here are Chris vanderZwan's notes as archived by Terry MacClean and passed on through Brian Greene and Wayne Richardson:

The first meeting (gathering?) was at the Tim Horton’s on Hazeldean near Terry Fox... Wednesday, February 25th 2003

First OWA Field Trip (and 3rd meeting) was out to Danny Proulx’ shop in Russell for a tour – Saturday, May 3rd

From there we started meeting at the Bells-Corners Public Library - October 3rd I think?

May 6th, 2004... Our meeting topic was “how best to proceed” John Blore Offered to help draft the constitution and bylaws

Here are the names from our first mailing list – a couple of these guys didn’t make it to the first meeting but this list is dated the week after the second meeting:

As you likely expected, there will be no physical get-togethers in September, and it is very possible this means the entire 2020-21 year.  Nevertheless, the OWA Executive will try to provide some interaction on First Tuesdays of each month using Zoom, starting with Tuesday September 1.

How will it work?  Early on, we will try to feed main presentations to the membership in Live Streamed form.  This means that a certain time (Likely 7 PM on a first Tuesday) someone will host a Zoom meeting and present a woodworky topic.  Members will be able to watch the presentation, and we may even be able to handle questions from the participants.  As we get better at this, we expect to provide Show-and-Tell segments.   There will be bugs and failures along the way, naturally.

If you have not used Zoom we recommend you install it and practise using it.  You can watch a YouTube introduction to Zoom .  If you would like to practice watching live sessions, send your email address to Geo…
Read more

November's meeting will be at the Wadkin Temple

November's meeting (on Tuesday the 5th) will be held at The Wadkin Temple, also known as Jack's woodshop.  High Priest Jack Forsberg will be demonstrating and explaining traditional joinery on vintage machines, in his overwhelmingly beautiful shop.  There will be no Show-and-Tell this meeting as all the time from 7 to 9 PM will be dedicated to this very special event.  PLEASE invite friends with any inkling for woodworking.  The meeting is open to members, not-yet members, and non-members of the Ottawa Woodworking Association; in other words, everybody is invited! The Wadkin Temple is where Jack hosts his annual Great Canadian Rust Junkie Fest in July.  The address is 6220 Old Richmond Road, Richmond, ON, K0A 2Z0.  There is plenty of room to park on the street.  If you would like to car-pool, you can park at our regular venue, Bethany Baptist Church at the western intersection of Centrepointe and Baseline, say, around 6:20 PM and leave the church by 6:35.  Or you can organize…
Read more

The next meeting of the Ottawa Woodworkers Association is coming up on March 5th.  Let's hope the temperature rises some by then.  If it does, don't forget your dry, warm, indoor footwear for the gym.  As always, meetings run from 7-9 PM, but doors open at 6:30-ish for setting-up.  It's in the basement gym of the Bethany Baptist Church at the Western intersection of Centrepointe and Baseline.  If you're not a member, note that new members are welcome to attend up to two meetings, no charge, before making a commitment to join.  The A La Carte menu includes tool swaps or sales, a 50-50 draw, members showing-and-telling, and who knows what else?  And now for the Menu du Jour: Are you a Maloofophile?  Then you'll be thrilled to learn our feature presenter, OWA member Dean Hummel, will talk about his visit to the Sam Maloof House and his building of a Maloof lounge chair with ottoman.
Read more

The next meeting, first Tuesday in December, falls on the 3rd. We meet in the basement of the Bethany Baptist Church from 7 to 9 PM. The church is at the corner of Baseline and Centrepointe, their Western meeting point.

We thank Lee Valley Tools for frequent and generous contributions to our special events. We are indebted too to The Wood Source for their generous donations of supplies for some of our challenges.